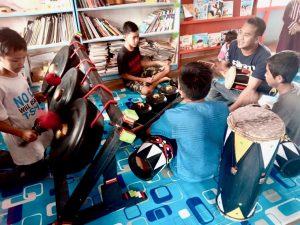 We are proud to announce that since March 2019  we have implemented a dance and music programme in Marang Library, which we opened as an educational centre last year. This is a three stage programme including teacher training, purchase of traditional Dayak instruments and children’s education. We were very fortunate in securing good quality musical instruments which were produced for us and delivered to Marang village earlier this year. Children have been greatly enjoying their music lessons with Yadi, a qualified music teacher, as well as Siti, a qualified dance instructor.

In the meantime Nikita, a teenage girl from the village, has started her teacher training under the tutelage of Yadi and Siti at the Hornbill Dance Academy in Palangkaraya. She is making very good progress and is on course for being able to take over the music and dance teaching in the Marang library by the end of the year. In addition to teaching in Marang, the plan for Nikita is to travel with the floating library to various other villages in the area and provide ongoing cultural education for the youngest members of these communities. Ifor the youngest members of these communities.

Poland is a country of rich culture and history within which are numerous distinct regions, many having their own characteristic music, art and traditional costumes. In addition, many regions have their own dialect containing unique words which are quite distinct from the standard vocabulary and often heavily accented, proving difficult to understand for unwary visitors. As in many other parts of the world globalisation, improved communication, travel and digital technology have had a significant negative impact on the particular characteristics which make one region special and distinct from another. This rich cultural diversity, which makes Poland so special, is being lost.

MEDyARTE’s aim, as always, is to preserve tradition and culture in all its forms. Poland is particularly close to my heart as it is the country of my birth. I have always loved the Tatra Mountains which I have visited many times and which have given me many special experiences and some amazing memories. I therefore decided to travel to Zakopane, a town at the foothills of High Tatras to meet with Krzysztof Trebunia-Tutka, a famous musician who has dedicated his life to the traditional mountaineers’ music.

Inhabitants of Tatra mountain villages always used to spend a lot of time playing instruments, singing and dancing;  not only when participating in various celebrations but also during their daily living activities. It was very common for shepherds to make their own flutes, fiddles and bagpipes. Eventually local artisans developed specialised workshops supplying a variety of instruments to the whole area. Unfortunately, over the last 60 years all of the old artisans have died, taking with them their knowledge and craftsmanship. The only instruments left were those in the hands of private families or museums. Additionally there developed a significant antagonism between music schools focused on classical music education and those providing traditional folklore music teaching. As a result, little by little the expertise needed to make and play these traditional instruments has started to disappear.

Luckily there are still people who are really keen to preserve this vibrant and important cultural heritage. One of them is Krzysztof Trebunia-Tutka. He comes from a long line of mountaineer musicians and his dream is to revive the traditional craftsmanship that has been nearly lost and forgotten. In “Jutrzenka”, the Culture Centre in Zakopane, he has created a music school specialising in teaching traditional folklore music, including dance and song. The school is open to all, age 7-20 and charges only a token very low subscription fee. The school is also supported with grants by the local government. Children can learn for four years in various chamber groups and orchestras as well as individually, dependent on their level of ability and dedication. Although the school is non-selective it manages to accommodate and enthuse all pupils, moreover many students flourish and progresses afterwards to mainstream secondary and higher music education. Groups participate in a variety of competitions and festivals locally, nationally and internationally with great success. Incredibly, at least 50% of pupils continue to play traditional music for the rest of their lives, both for tourists and for locally organised events.

These are fantastic achievements which might at first glance suggest that the future of traditional folklore music in this region is assured. But there is more work to be done. The instruments used by the pupils are mostly modern violins and cellos and there is a significant shortage of the traditional shepherds’ instruments from which the folklore tradition stems.  Krzysztof hopes to recreate this original sound and instrumentation. He has worked with local artisans who have managed to create new bagpipes, fiddles, and various types of flutes and horns by faithfully replicating old traditional instruments. What Krzysztof is yearning to do is to have enough shepherds’ instruments made to allow him to teach more pupils on them and to pass on his knowledge to a younger generation.

I was extremely lucky to be able to participate in a rehearsal of a music group run by Krzysztof. It was clear to me that the children were very engaged, dedicated and they hugely enjoyed their music making. They looked up to their Master with a great awe. Some of them are already learning to play on old fashioned flutes and fiddles but the cost of these instruments is prohibitive to most. They complement their playing with fantastic singing and local language and are proud to wear traditional clothes. It was heart-warming to see that these youngsters are set on protecting and celebrating their heritage.

MEDyARTE Foundation is planning to explore the possibility of funding a selection of traditional music instruments for the art centre in Zakopane with the aim of creating a shepherds’ instrument chamber group. We would be proud to cooperate with such a worthy organisation and inspire individuals to protect the mountaineers’ cultural heritage for centuries to come.

Yayasan Harapan Pendidikan Borneo is an NGO providing educational programmes for the villages near Palang Karaya in Central Kalimantan, Borneo and was founded by Aini Abdul in 2002.

Aini grew up in a small village in the local area and later became a teacher and a tourist guide. In the course of her work she observed the lack of adequate educational provision for village children. Coupled with her own childhood experiences she was spurred into action – her dream was to create a network of libraries in the villages along the Kalimantan rivers.

She started a Ransel Buku programme. Directly translated, Ransel Buku means “backpack of books” and initially Aini brought books to remote villages in a bag to help children learn to read and to nurture within them a love for books.

A year ago, she managed to secure funding to build a library in Katimpun village, 17 km away from the city of Palang Karaya. She successfully employed two permanent qualified teachers who divide their time between working in Katimpun library and travelling with a floating library to four other local villages. On a daily basis, a librarian visits a different village with a bag of books. Elders of the villages involved have allocated a building where children can sit and read the books throughout the day while the librarian supports them as well as organises various activities.

In the library in Katimpun, children have free access to books and receive structured teaching based on an enrichment programme comprising topics on the environment, health and culture. In addition teachers provide whatever educational support children require including writing, maths and sciences.

Before the library was operational only two out of thirty students at the local school were able to pass national exams on completion of their education but this year 100% of students were successful thanks to the support of the librarians.

The local community is fully supportive of the library programme and appreciates the amazing progress they can see in their children. Villagers actively participated, on a voluntary basis, in the building of the library facility in Katimpun, and now continue to contribute to its upkeep.

The library also provides a valuable cultural and social focal point for the local people. Dance and singing lessons are provided by local dance teachers from the Hornbill Academy of Traditional Dance in Palang Karaya, and it acts as a meeting place for adults, maintaining and promoting community spirit.

The library programme has been so successful that other villages have been enquiring about building their own. The villages in question are less remote but despite this no less underprivileged in many ways, especially with regard to education provision. Their better accessibility is an attraction as this reduces potential future transport expenses.

Only absolutely essential items will need to be bought in. Book shelves and tables are going to be ordered from a local woodwork shop. Mural paintings are going to be done members of the project and local volunteers.

Yayasan Harapan Pendidikan Borneo plans to involve the whole community in the refurbishment and envisages many parties in the village working together to achieve success. This community involvement is a unique feature of all Yayasan Harapan Pendidikan Borneo programmes and one they are passionate about; it aims to create a sense of belonging and unity.

Yayasan Harapan Pendidikan Borneo NGO normally provides lunch for all who help and in a limited number of cases a very small financial reimbursement. Most of the work is expected to be done voluntarily. Background assessment done by Yayasan Harapan Pendidikan Borneo indicates that the villagers are happy to work together to build a child friendly libraries in the proposed villages.

The maintenance of the buildings is expected to be done voluntarily by the villagers on an ongoing basis.

Yayasan Harapan Pendidikan Borneo estimates that two further librarians/teachers are needed to work in the new libraries and to supplement the currently overwhelmed teacher providing the floating library program. At present the floating library reaches 4 remote villages but this may expand in the future. The new librarians/teachers will be working 6 days a week (Mondays to Saturdays) at the library/learning centres.