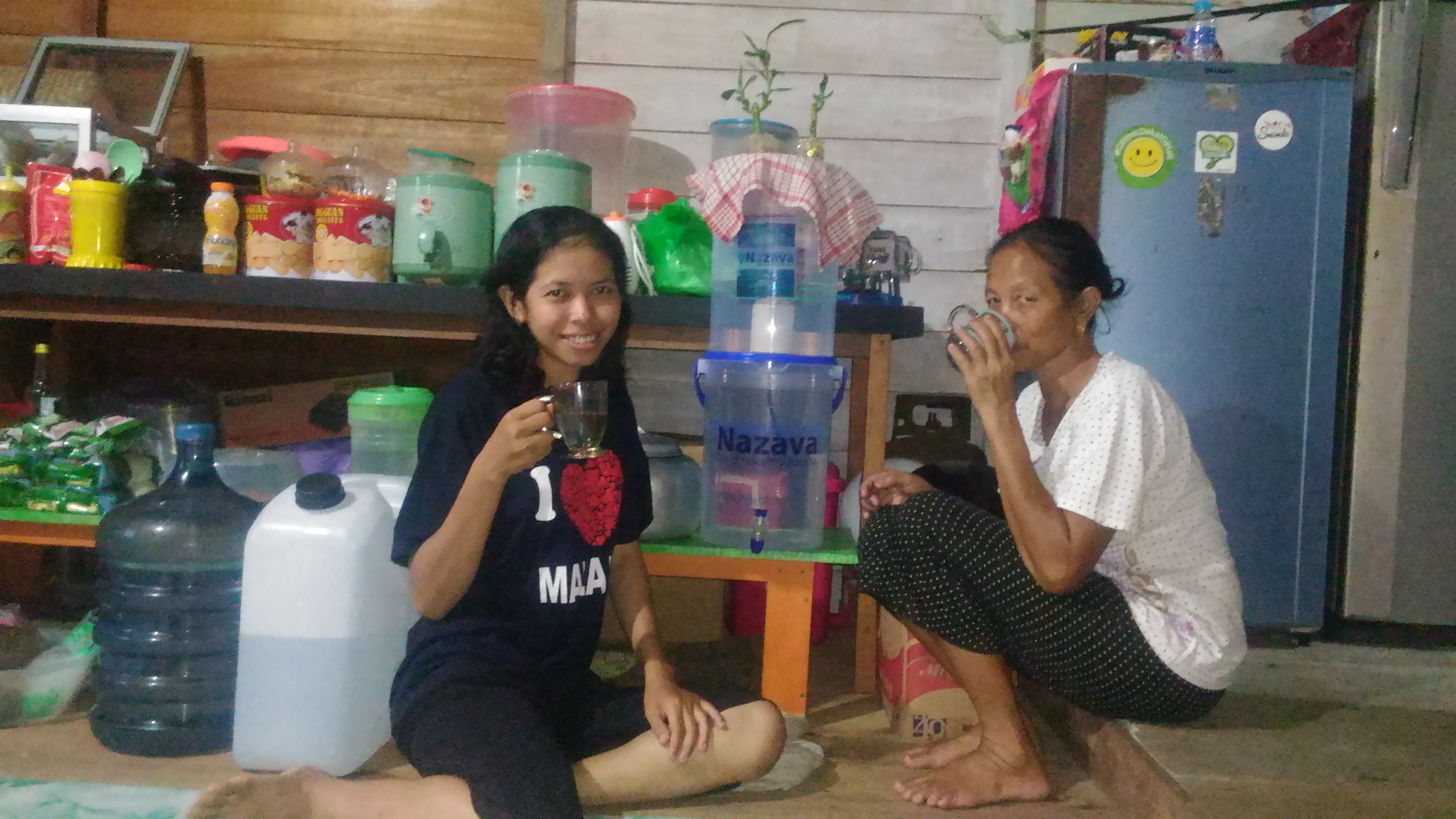 The recent survey of the families living in Katimpun village has shown that everybody is still using the water filters provided by MEDyARTE Charity a year ago. The great news is that their effectiveness has not diminished. Diarrhoeal disease is “virtually non-existent”, according to the head of the village. This is absolutely fantastic news, as previously the frequency of vomiting and diarrhoea due to impurities in the drinking water was so high that it exceeded all WHO world statistics. We hope that these benefits will last indefinitely and that the same approach can be used in many other parts of the globe in affected communities.

Villages along the rivers of the Kalimantan region in Borneo have a worryingly high incidence of diarrhoea due to poor sanitation and a lack of clean water. It is accepted practice for villagers to defecate directly into the river and drinking water is then taken from the river and ingested without further treatment. There is limited piped water available. This situation is mirrored in all villages along the river therefore water contamination is happening at multiple points along the river course. Any meaningful and lasting improvements to sanitation would therefore need to be introduced simultaneously and uniformly in all river-side villages and would ideally need to include toilets with no outflow directly into the river, hand washing facilities and piped water to every household.

This remains a long term aim, however in the meantime we propose that the effective treatment of water at household level in combination with hand washing may reduce the incidence of diarrhoeal illness in a short timeframe. Recent advances in technology have produced water filters which can effectively remove all particles in excess of 0.4 micron, including diarrhoea-inducing bacteria. Consequently they have been shown to cause a significant reduction in the incidence of diarrhoeal illnesses. These filters also remove heavy metals which are a significant additional contaminant in Kalimantan where many local people engage in gold mining by sieving soil from the riverbanks or river bottom.

Initially baseline data regarding incidence and prevalence of diarrhoea in the village of Katimpun will be collected once a week for three months.

Thereafter in addition to a water filter, each household will be given health education including good hand hygiene techniques and instruction in how to use the water filter. This will be carried out by the distributor of the water filters and the local midwife who also serves in the community as a nurse. There will also be a group of 5 young volunteers in the village who will help with long term supervision of filter use, identifying and addressing any ongoing educational needs and offering general support as needed.

Provision by MEDyARTE charity of water filters (one filter per household – each filter is sufficient for a family of five, plus filters for a local school)

3-6 months later data collection regarding incidence and prevalence of diarrhoeal illness will be done as before – every week for three months. In addition, families will be asked whether they are using the water filters every day as instructed.

We hope to show that the provision of water filters to individual households supported by practical operational and hygiene education can significantly reduce the incidence of diarrhoeal illnesses in this community.

If data analysis supports this assumption then further fund raising would be organised with the aim of providing water filters for villages further up the river. Water filters cost approximately 20US $ per household and last 3 years if looked after properly. Thereafter a replacement filtration candle costs 7 US $ and lasts for an additional 3 years. Our hope is that once the villagers appreciate and realise the benefits of the filters and their use becomes established and automatic, they will continue using them and buying replacement candles as appropriate every 3 years without further support of the charity as this seems a realistic and affordable cost in comparison to the cost of boiling water.

After several months of planning we have finally succeeded in delivering water filters to 400 inhabitants of Katimpun Village in Central Kalimantan. We had wonderful support from the local population who were heavily involved in the organisation of the event and were also fortunate to have the invaluable help of Jeroen van Overbeek who has lived in Indonesia for many years and specialises in the provision of water filters to remote parts of Indonesia. Nevertheless, despite this, there were plenty of unexpected obstacles!

The event had been planned to take place a week after the end of Ramadan to avoid any difficulties of a religious nature and so the filters were supposed to have reached the village by land before this date. What we did not anticipate however was that the local government decided to close all roads during the period of Ramadan. As a consequence, the planned delivery of the filters could not go ahead. Luckily, thanks to the resourcefulness of Jeroen and support from the Nazava Filter Company, delivery did happen – by air!

As it turned out this was not the only unwelcome surprise. On the morning that Jeroen was due to board a plane from Denpasar (Bali) to Palangkaraya (Borneo) to start educational sessions in the village, the notorious Bali volcano, Mount Agung, exploded. This resulted in Denpasar airport being closed. Amazingly, Jeroen managed to travel by bus to Java, from where he took a plane to Borneo and arrived in Katimpun just in time for the event. His journey lasted 28 hours instead of 4!

The people of Katimpun were very enthusiastic about the filters and incredibly grateful for their arrival. At least one member of each family attended a gathering in the local library where Jeroen instructed everybody on how to assemble and maintain the filters while Rhamah, the local midwife, gave a presentation that had been prepared by us in the UK about the importance of clean water supply and ways of preventing waterborne diseases. The event continued for several hours with many questions, banter and laughter.

Jeroen wrote after the event:

“We had a lot of fun during the distribution. The villagers were super happy and thankful for the water filters. It was a fantastic experience, they were very attentive.

After having introduced the filter, we called the women in groups of 5 and started the distribution of the 104 water filters. Each woman was asked to assemble the water filter under the supervision of the team, so they would know how to do it at home. This is a crucial step and the women understood that. So they were patiently waiting for their turn. Before going home with the water filter, every woman thanked me on behalf of MEDyARTE. It was very touching. “

We really hope that the water filters will make a significant difference to the health of the local population. We are looking forward to following up their progress in the village.

Two trustees personally visited Katimpun village to assess the impact of the water filter delivery which took place two months ago. All households as well as the junior school, senior school and the library use water filters on a daily basis. Water is taken from the river, initially allowed to stand in a container overnight for gross impurities to settle down and then used in the water filters. The filtered water is of a nice clear colour and tastes good. Residents have reported significant reduction in the frequency of diarrhoeal illness. Such is the success of the project that the village has stopped buying supplies of water in containers which will reduce yearly household expenditure by 120$, not an insignificant amount of money for a fisherman’s family in Borneo!  Also, there is no need to boil the water which adds additional cost savings. We are hoping to perform testing of river and filter water for e-coli and other pathogenic bacteria, to further reinforce the of benefits of clean water in Katimpun village.