The beauty and surprises of Kyrgyzstan

Kyrgyzstan made a great impression on me from the moment I stepped off the plane in Bishkek, the capital city. Immediately, I noticed the unique nature of the country. Greener than I had ever imagined, a cacophony of noise emerged from every side street with locals chaotically hurrying about their day, the city roaring with life. Despite the exhaustion from jetlag, Gosia and I made the 4-hour journey to Cholpon Ata, a town on the north shore of Lake Issyk-Kul. The journey was by no means smooth. The deteriorated roads, lack of road safety and a constant desire for our taxi driver to overtake any car in our way made the two of us sit in fear grabbing onto our seats at any given moment.

The journey made me rapidly aware of the soviet influence over the country. We passed through identical looking towns each sharing the simply constructed decrepit building blocks, typical of a soviet urban architecture. Alongside these urban districts however, the traditional nomadic way of life clearly thrived. 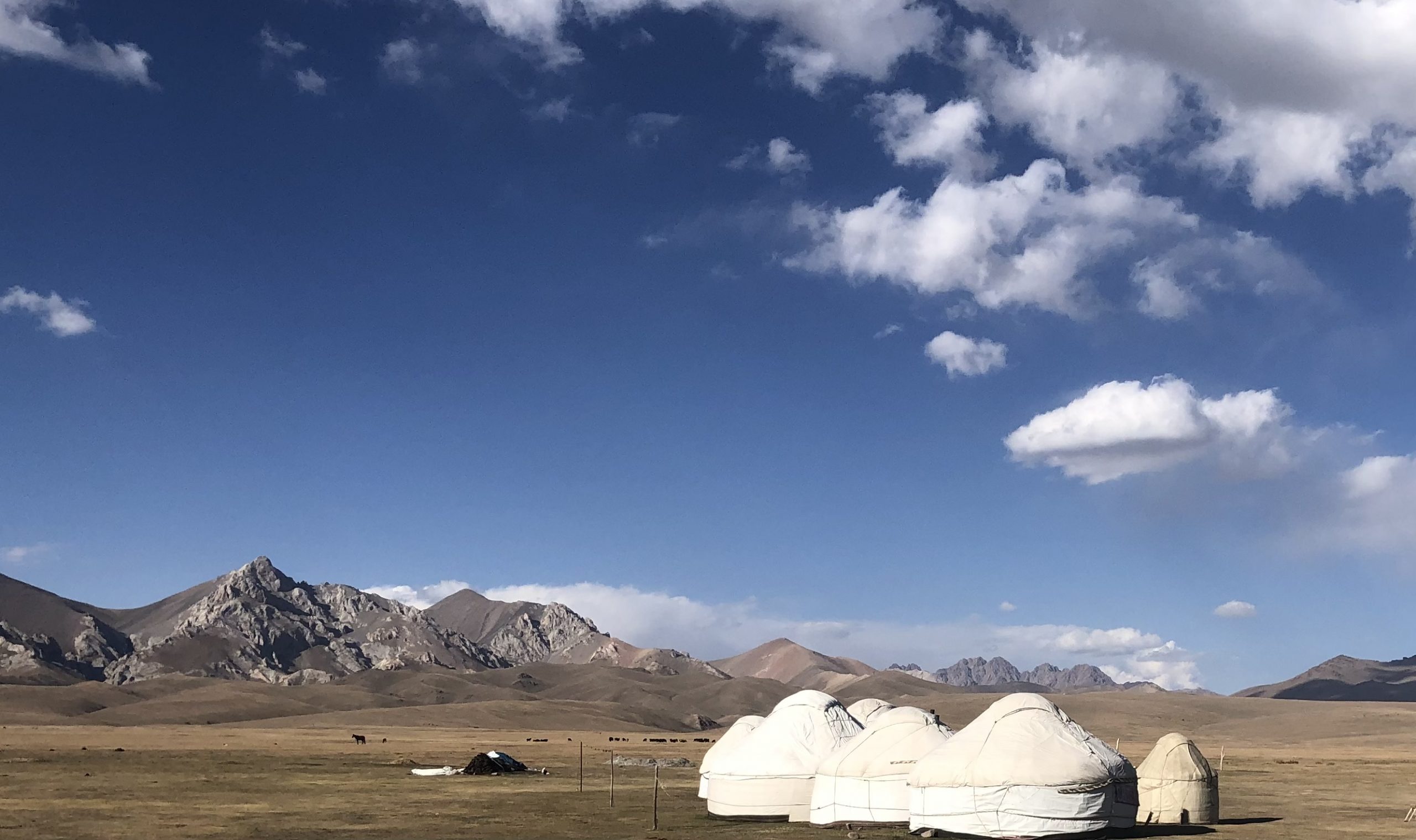 Historically all year round, but now only during the spring, summer and autumn months, Kyrgyz families live in yurts peppered all over the expansive mountain ranges. Isolated from any means of reception, civilisation and supplies of basic produce, this minimalist life-style was fascinating to experience and endure during our travels yet certainly raw and difficult to become accustomed to. 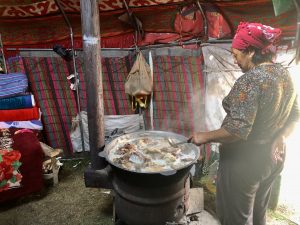 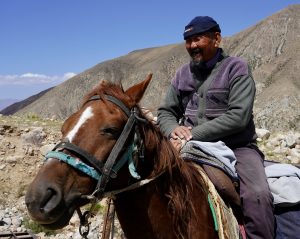 The beauty of the country was undeniable and I certainly felt at one with nature. Watching the wild horses roam freely as far as the eye could see allowed me to forget my worries; living in the present with no chaos, no haste and no structure. 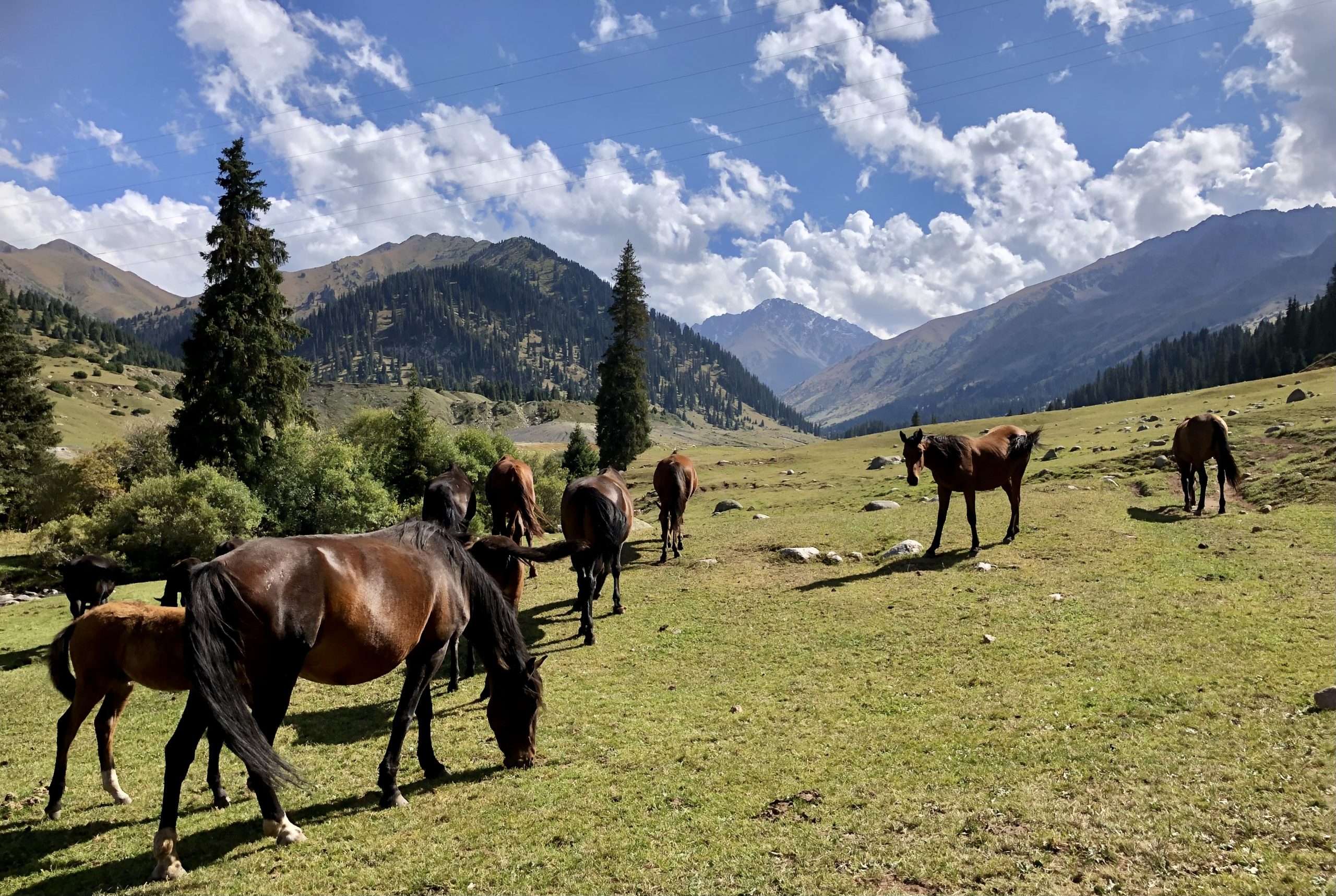 As we arrived in our first destination, Cholpon Ata, I was instantaneously struck by the difference in culture and customs to what I was habitually used to at home. I was most shocked by the apparent hierarchal structure of the society which influenced every aspect of daily life, soon learning, for example, that most marriages in Kyrgyzstan are still to this day arranged. Honestly, as a 19-year-old girl, brought up in Central Europe, I struggled massively with this lack of freedom and evident-on-every-step social structure. Treated as not only inferior, but also actively ignored by elders when it came to decision-making, my self-confidence dropped dramatically. However, as I became aware that this behaviour was not out of rudeness but rather custom, I strangely found myself intrigued, yearning to learn more about this dissimilar culture.

At such a young age, I have been lucky enough to have already travelled the corners of the world, discovering the ways of life and traditions of many countries. However, with each new place I visit however, I am saddened by the evident fading of the importance of local culture. The disappearance of the Kyrgyz culture was brought to my attention early on in my trip. It was obvious that only a fraction of citizens wanted to immerse themselves in the traditional customs, costumes and music of the country, while most preferring to engage with the modern western lifestyle. However, having experienced the nomadic life myself and recognising the joy and freedom it brings to those who follow it, I found myself with a longing desire to protect the Kyrgyz culture by any means possible.

MEDyARTE’s former project in Kyrgyzstan, was set up in Cholpon Ata, the town we travelled to, in 2019. It involved the funding of display cabinets for the local arts museum in order to encourage a larger and wider exhibition of traditional artefacts. Visiting the museum for the first time with Gosia, and seeing the display cabinets filled with objects from bygone era, was a heart-warming experience. 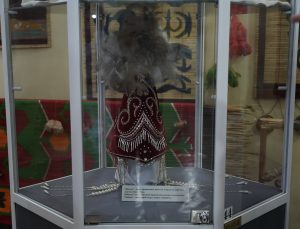 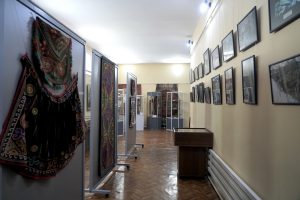 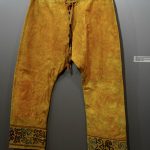 The constant thanks and appreciation that we were given for our support to the museum was overwhelming and certainly was evidence for the success of the project. I think I can speak on behalf of both Gosia and myself that being told that our display cabinets drastically increased the number of museum visitors gave us a strong sense of pride.

Thinking about ways to protect the Kyrgyz culture further, Gosia and I spent a day with a group of various artisans learning about the vast range of traditional objects and outfits and the way they are made. 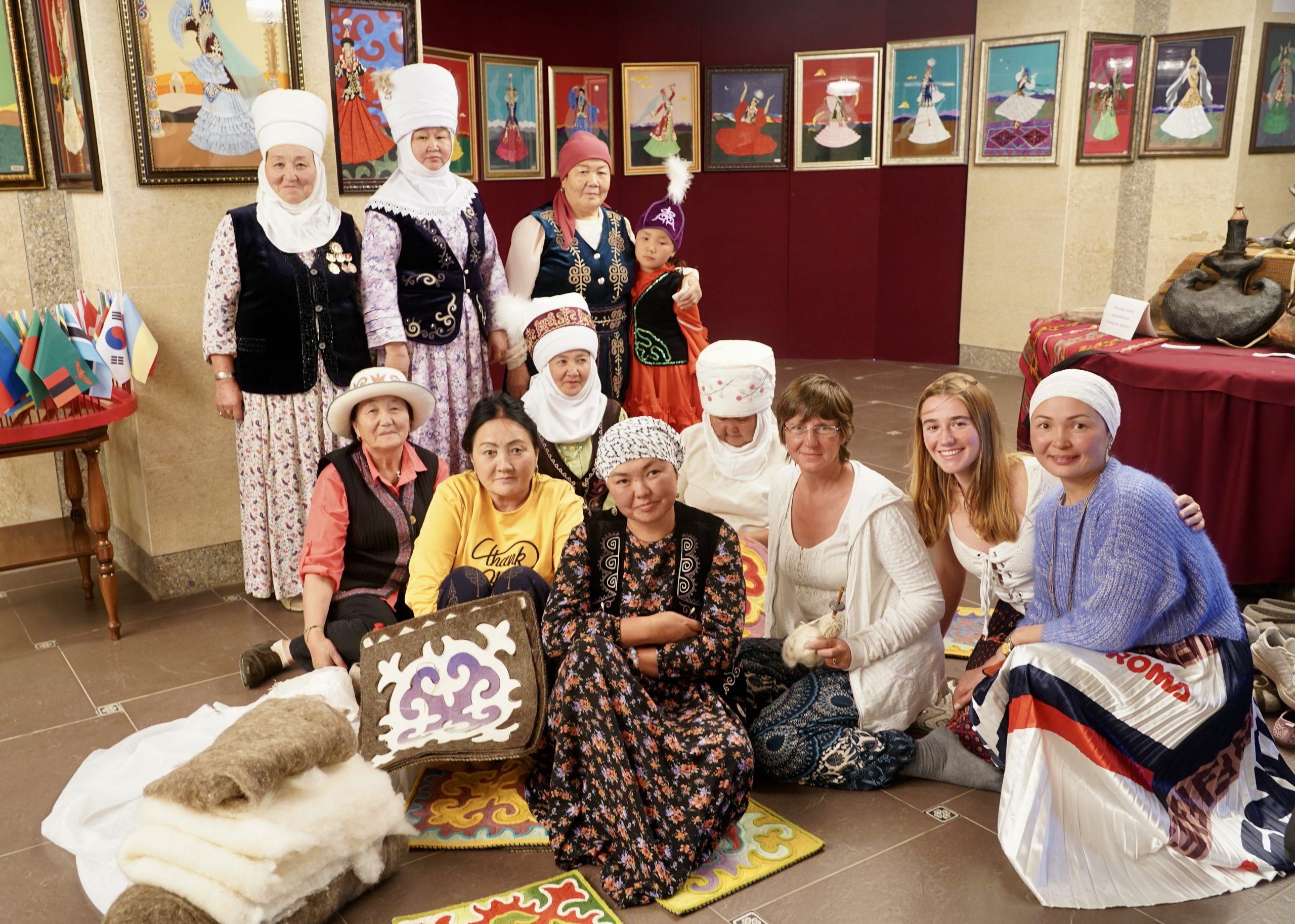 Each artisan was equally inspiring, aiming to educate people across the world about the Kyrgyz traditions and the importance of keeping these traditions alive at the heart of the society. Examples of some of the artefacts we saw included sherdaks (felt carpets), rope (made from the twisting of horse-hair) and urmoks (a long-woven band used for the decoration of yurts). 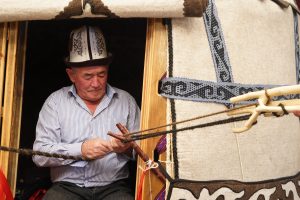 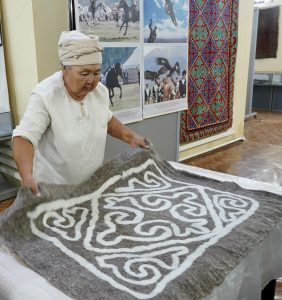 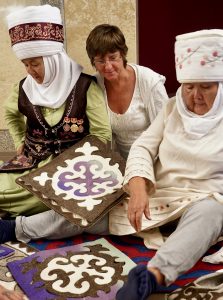 For me, the most fascinating product was the urmok. We were told that only very few people in Kyrgyzstan are left who know how to make this traditional decoration, the artisan therefore fearing disappearance of the knowledge after her inevitable passing. She told us that she currently runs weekly masterclasses, teaching locals how to make the urmok, however only has three individuals who are showing any greater interest. This lack of engagement in the traditional artefacts seemed to be a universal concern for each of the artisans. It was evident, therefore, that they required our help to ensure the diffusion of this education and future protection of the culture.

Since our return, Gosia and I have started discussing a potential project in support of either an individual or group of artisans. We hope to create a project that will both aid in the production of Kyrgyz traditional products and, more importantly, ensure the education about the artefacts remains prevalent amongst both locals and tourists. 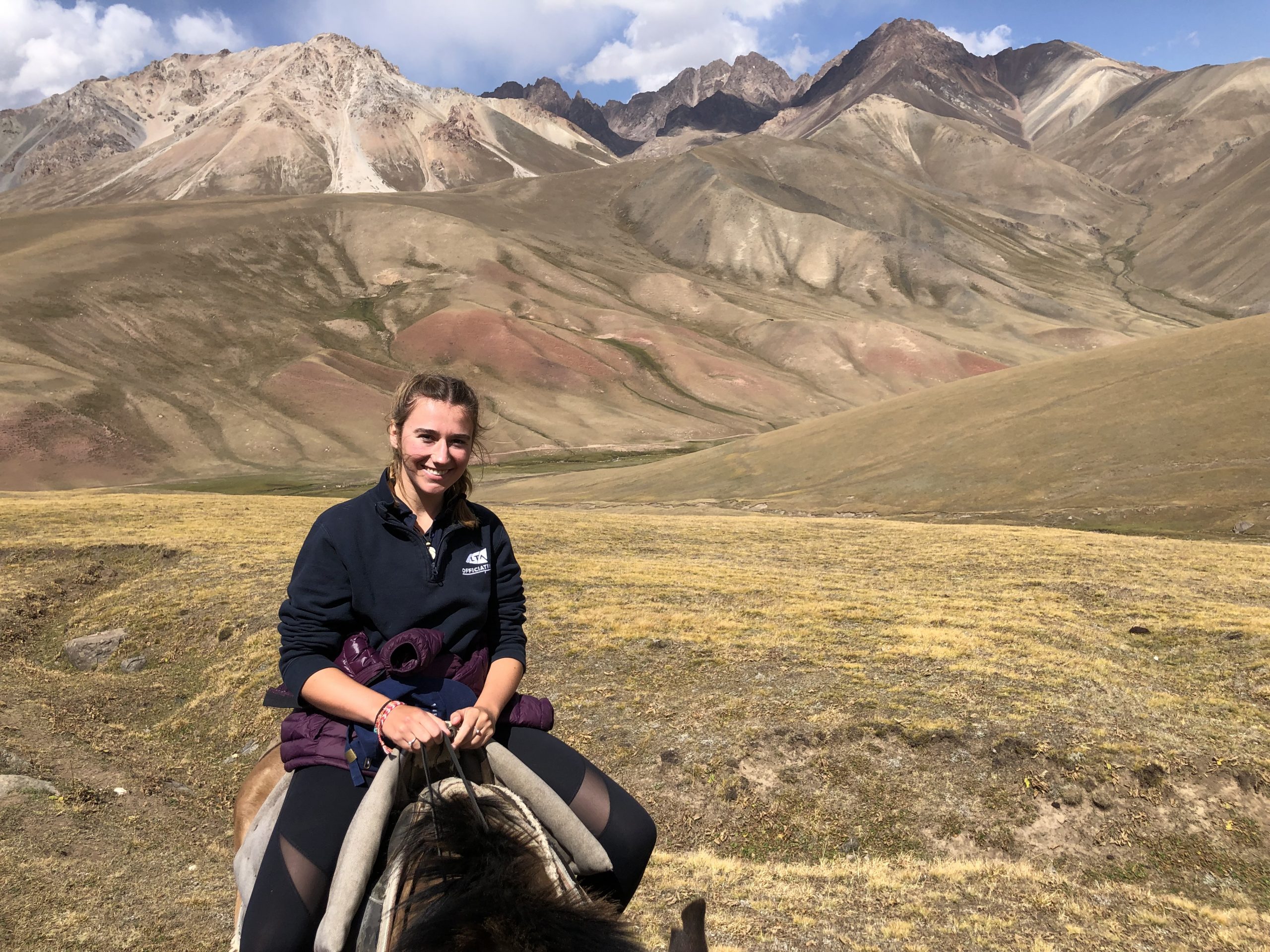