El Salvador, known as the Land of Volcanoes, is the smallest and most densely populated country in Central America. It became independent from Spain in 1821 but in the twentieth century experienced a 12 year civil war which eventually came to an end in 1992. As a result, 20% of El Salvador’s population resides abroad, mainly in USA, Mexico, Guatemala, Honduras and Costa Rica and the country still struggles with a significant amount of poverty. Its recovery has been further affected by natural disasters including earthquakes in 2001 and hurricanes in 1998 and 2005 as well as a marked amount of crime related to gang activity. Despite this El Salvador is the fourth fastest growing economy in the region.

I have travelled 900 km across the width of the country visiting various communities of artisans with a view to finding a location for a new project for MEDyARTE to support. I cannot imagine a more deserving population – hard working, warm and kind and determined to succeed despite an extremely hard financial situation. 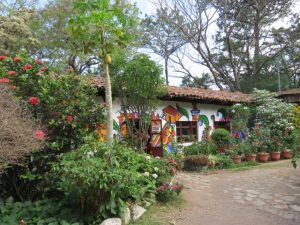 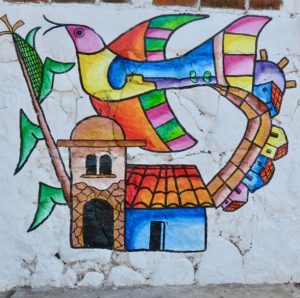 Hotel in La Palma and a mural in town

I started in La Palma which is renowned for its traditional wood paintings and murals. La Palma is located on the slopes of the highest volcano in El Salvador – El Pital, surrounded by mountainous scenery and blessed with a cooler climate which gives respite from the heat and high humidity of the lower lying regions. By the time our team reached La Palma at midnight, despite the fact that the hotel staff were expecting us it turned out to be far too late for them to be present, everyone had gone home to sleep! It was very lucky that our guide managed to rouse the owners of a little hostel opposite the hotel who offered us some basic accommodation for the night! At 6am the following day I was woken by a cock crowing and birds singing and my eyes were met with the idyllic scene of a sleepy mountain village.  The hotel doors opened and we had the pleasure of meeting the town mayor and a group of local artisans who presented to us their wares. They proudly displayed beautiful fabrics coloured with traditional natural dyes, jewellery made out of a variety of indigenous seeds and wooden hand painted decorative boxes and crosses. We shared breakfast together and spent some time discussing the needs and hopes of this community. Their main problem seemed to involve gaining access to wider markets for their products. 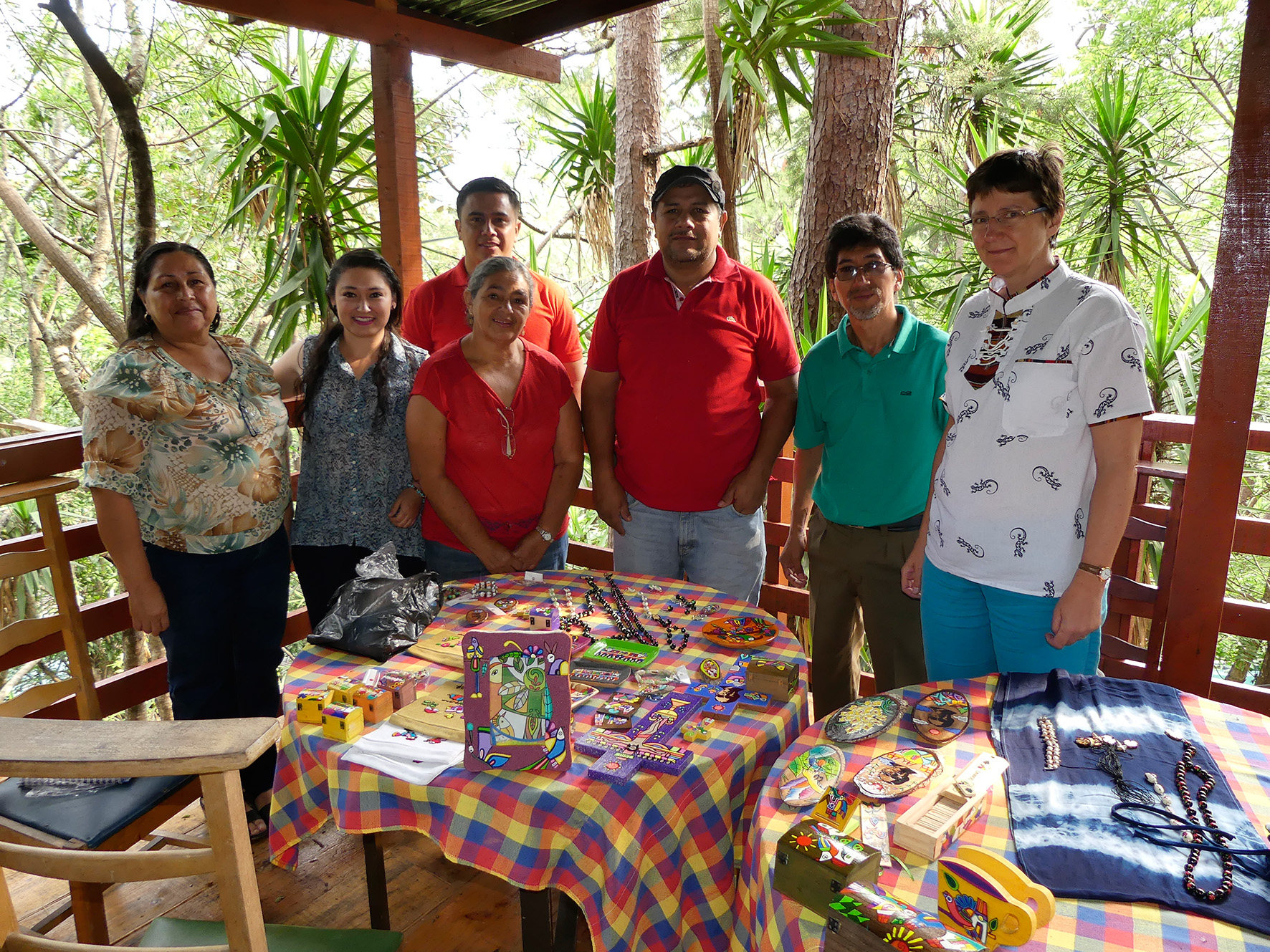 Soon we were on our way again. Climbing steep inclines we were grateful for our four-wheel drive pick-up truck.  The numerous hairpin bends were at times heart stopping. On the way we passed endless small wooden abodes and villages intermingled with truly magnificent scenery of the lakes and mountains. Eventually, before finally arriving in Ilabasco, we passed a little gem of a town, Sichitoto, a remnant of the old colonial times.

In Ilobasco we were delighted to meet a diverse group of artisans famous in the region. Their signature products included miniature clay designs, particularly of Christmas scenes, which can be found in shops even in San Salvador city. I was amazed to witness a production of these pieces by a young mother of two in the back yard of her hut; she was creating these minute pieces of art, which would fit in an egg shell, by hand, using only the most basic implements. At the same time, she seemed to be in charge of childcare, household chores and a variety of elderly relatives residing in her home. The sweltering heat was making it difficult to breathe. 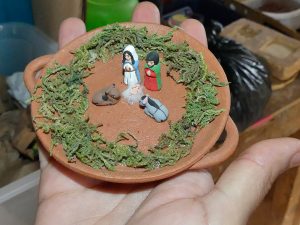 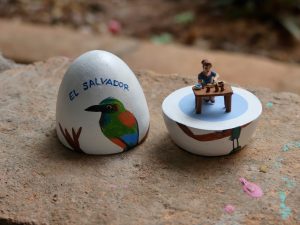 It was hard to believe that she was one of the lucky individuals in her community as she was able to use her artistic skills to improve the economic standing of the entire family. Her wooden house was considered to be superior to many other households as it stood on the outskirts of the town which meant that the air was cleaner and there was shade from a green tree in the garden. Together with other artisans in town she formed a type of cooperative which provided mutual support. Another particularly outstanding member of this group was a duo of an older man and his apprentice who had built a studio for creating clay pieces based on old Mayan designs as well as some more modern, bespoke items which demonstrated great skill and talent. 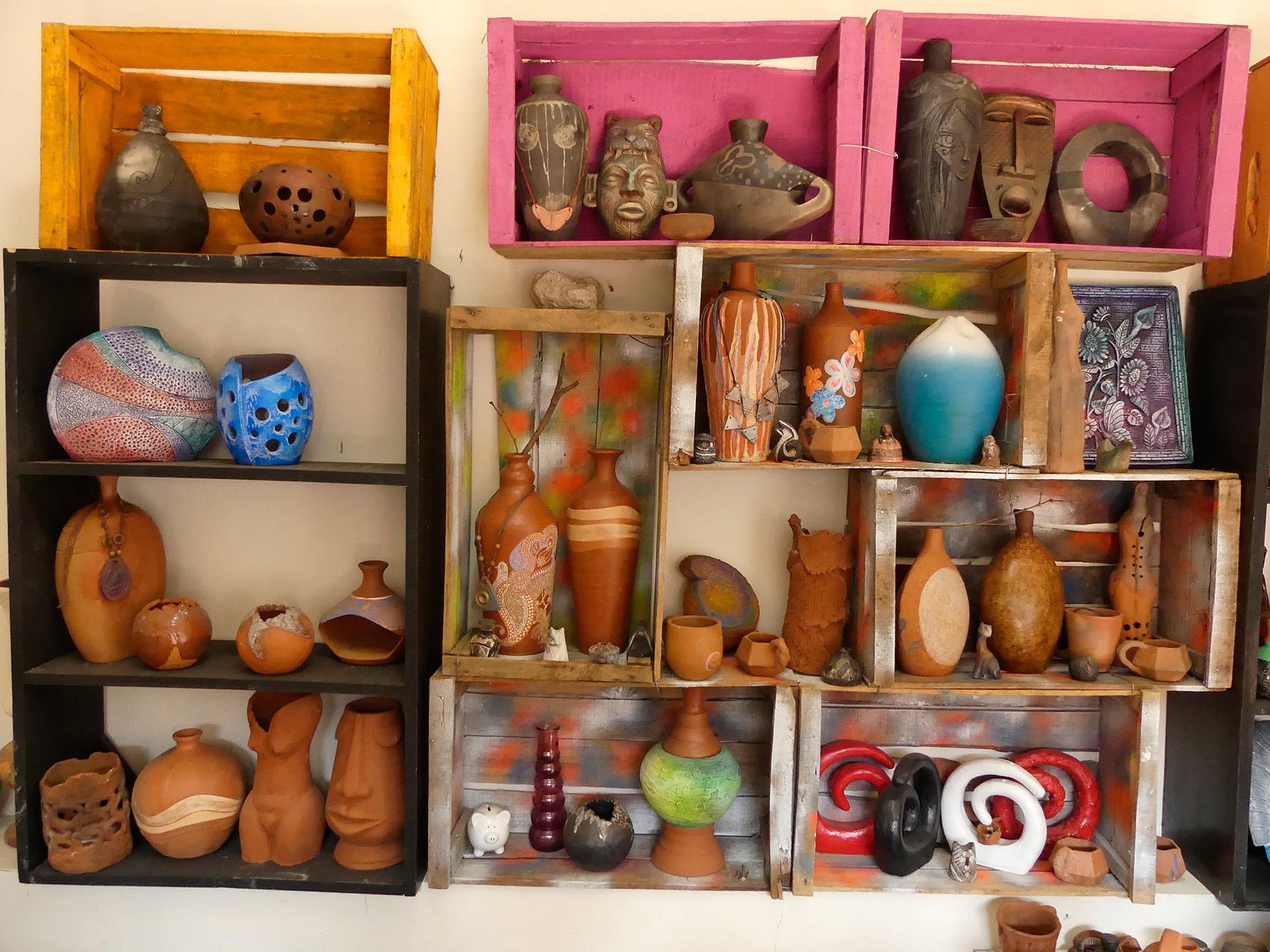 Old Mayan and modern designs in a pottery studio Ilobasco

The next stop on our tour, San Sebastian, was famous for its weaving industry. Nearly every family there possesses a loom or works as a part of a weaving cooperative. Men would normally start work at a loom at 5am and continue for 12 hours with a half an hour break for lunch. Women were usually employed to prepare thread for weaving as this is considered a slightly lighter job. A lot of the woven fabrics are utilised for the production of hammocks which are commonly used instead of beds. Interestingly, although the producers are keen to use natural fibres such as cotton they rarely do so as the local population, who are the main customer for their goods, simply cannot afford it. Sadly, skills involving intricate fabric designs are getting gradually lost as the old generation of artisans dies out and the younger ones are more interested in computer technology then working on the looms. Weaving is however here to stay as it constitutes the backbone of this community and the main source of income. The working conditions are extremely basic and harsh. The wooden looms seem to be in desperate need of tender loving care, so it filled me with awe to see what high quality products are manufactured there. 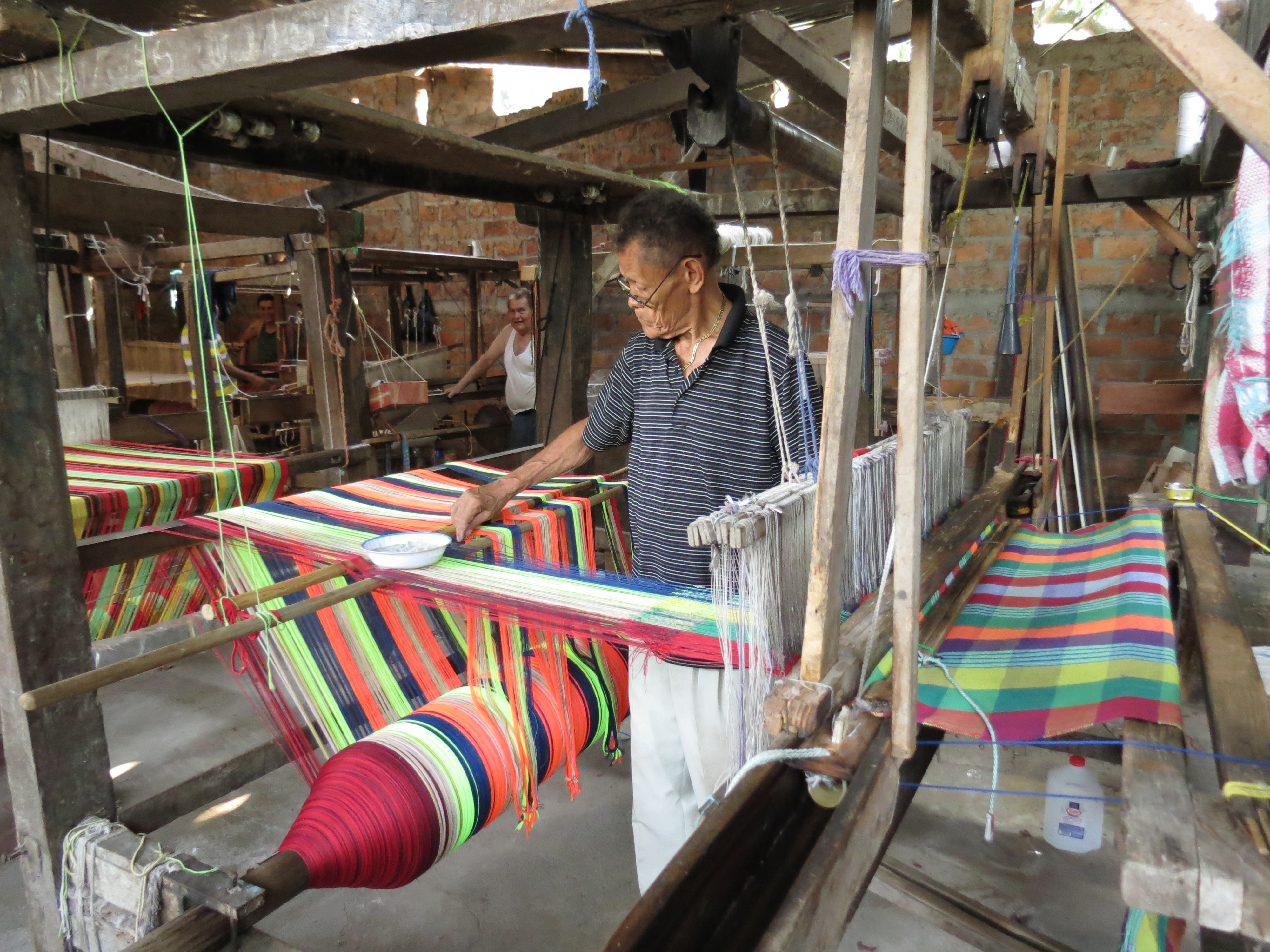 Finally, we visited the Morazan region famous for its unique black clay industry. The town of Guatajiagua is the centre for this low temperature fired black pottery created originally by the pre-Hispanic Lenca people. Most of the population has inherited the skill of crafting black clay utensils from their grandparents. This ceramic is different from the others found in the rest of El Salvador due to the liquid wash produced from “nacascolo” seeds, which gives it the unique black colour. I was privileged to observe the entire process of production from the drying of the excavated clay in the sun, shaping it without the use of a pottery wheel into a 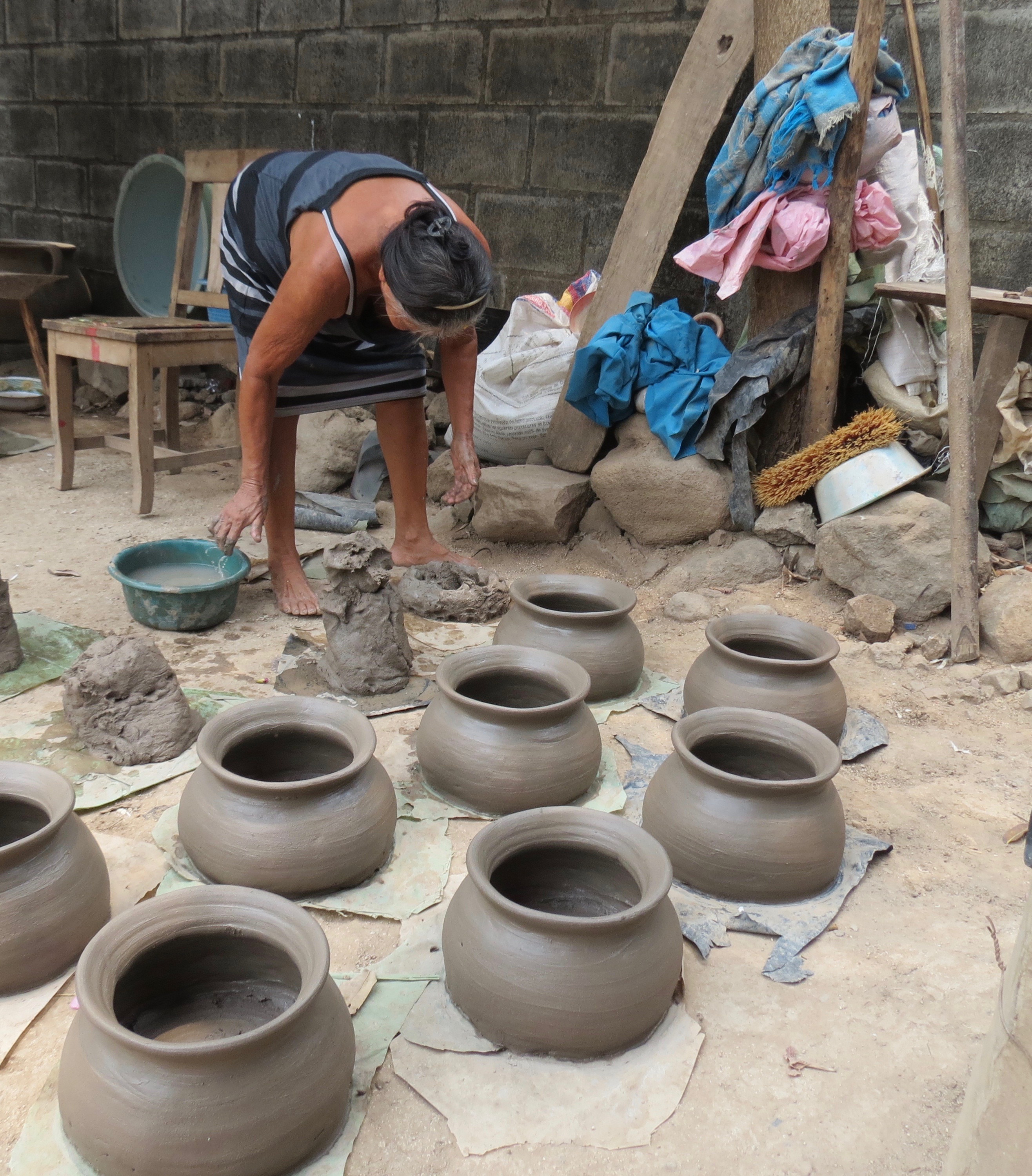 variety of crockery items, preparation of the nacascolo dye and eventually to the firing of dishes in specially made ovens fuelled by hand collected wood. The firing process only lasts three to four hours which unfortunately means that the pottery is rather fragile. Nevertheless, its rustic beauty cannot be denied and the local population uses it widely on a daily basis for cooking. 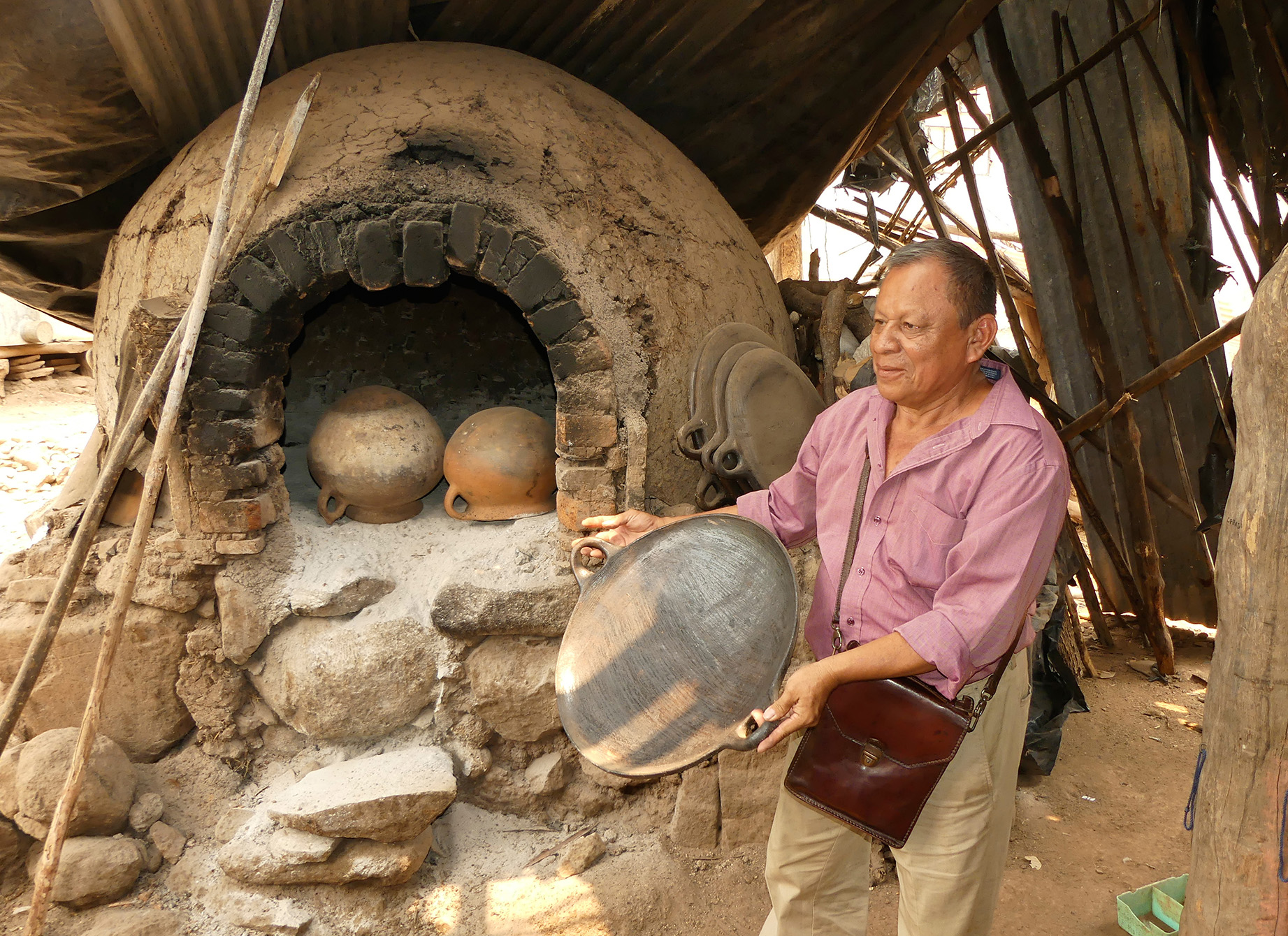 Oven for firing black pottery and the products

The last leg of our journey took us to a small village in the mountains where I was able to offer my services as a doctor in a small medical clinic. This was an experience which was equally humbling and uplifting. Although the health service in El Salvador is free, patients usually have to pay for their own medication, some of the investigations, the cost of travel to distant locations where a specialist can be found and accommodation during such a visit. As a result, a significant proportion of the population cannot afford such expenditure. The clinic I helped at was set up by a charitable organisation which meant patients did not have to pay for their management or medication. Only a very limited amount of medicines was available to treat an extensive number of often very significant problems. Patients would line up from early morning, wait without grumbling for their turn and listen carefully to the advice given with an air of appreciation and gratefulness. Despite incredible heat, limited resources and a huge number of patients this was an experience that was probably one of the most rewarding in my professional life. It put into perspective my medical work in the UK as well as issues and problems with which I struggle on daily basis. 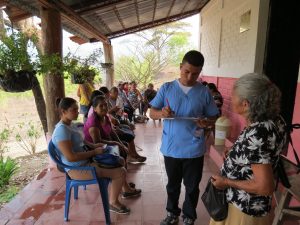 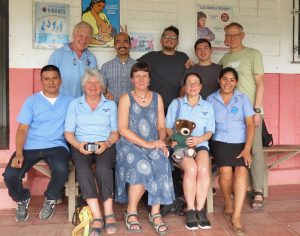 NGOClinic and the team of charity workers

We are now awaiting proposals from various artisan groups we have visited during our reconnaissance tour and hope that after reviewing them we will be able to put in place a new programme in El Salvador. Clearly there are many elements that need to fall in place before this can happen but we will continue to work to resolve these in a satisfactory manner.